skip to main | skip to sidebar

Apple of the Month - Ashmead's Kernel 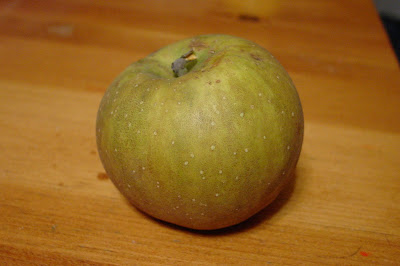 Like many old apples, the originator of this variety is in its name – Ashmead. In 1700, Dr. Thomas Ashmead raised a tree in his Gloucester, England garden. The second half of the name “Kernel”, is a common term for a tree grown from seed (aka pip or kernel).

Ashmead’s Kernel is a great example of not judging a book by its cover. This small to medium apple is not found in the grocer’s because of our tendency to buy with our eyes and not our taste buds. Ashmead’s has a drab russeted appearance, resembling a greenish golden smooth potato but beneath this exterior is one of the most splendid tastes in the whole orchard!

The British have a candy called a “pear drop” which most North Americans have never tried. The closest thing we have with similar flavoring would be “Juicy Fruit” gum. Most people will find some taste similarities in russeted apples. They tend to have flavor descriptions that sound more like wine than fruit. Common terms used include “nutty, sharp and aromatic” even “hints of oak” have been used to describe Ashmead’s – odd for something fresh off of a tree instead of drawn from a barrel. There is an elusive indescribable character to the Ashmead’s Kernel which sets it apart and is the reason why this apple has been so popular worldwide for hundreds of years. You simply must eat one to know one.

When coming to North America many early settlers brought bench-grafted apple trees along with them. Having a healthy orchard was a priority as cider was the most popular drink. Most family favorites brought to the New World did not adapt well to the climate and were cast aside in favor of newer seedlings. There are a small number of apples from England that thrive in the states, Ashmead’s is one of them. Listed in many eastern publications by 1826, this apple was exhibited before the Cincinnati Horticultural Society in 1855 and quickly made its way west. Here in Kansas (where we once had over 20 million fruit trees and 2,500 apple varieties growing), it was held in great esteem and was listed in many growers “top 10” apples for their counties. At Wagon Wheel Orchard, our trees have grown for over a decade with little or no maintenance. Many of our trees were bearing fruit the third year we grafted them. (see Jan 4th, 2011 blog article on custom grafting)

Ashmead’s is a fantastic eating apple, especially with a good cheese. Our favorite combination is Camembert (a soft brie-like cheese), sesame crackers and Kernels. Camembert cheese is gaining popularity and can be found in most grocery stores. Historically Ashmead’s has been a favorite for making a varietal cider (hard cider) or to be used in cider blends to add complexity.
Posted by Wagon Wheel Orchard at 7:11 PM


We normally take appointments as Mother Nature allows - please text (913-893-6050) or email us at wagonwheelmail@aol.com Facebook will have current info

(From Gardner, take Main St West through town. This becomes 175th St. The road curves to the left near the high school - do not take that curve - stay straight on 175th St. (West) until you get to Edgerton Rd. Turn Right & head North to house and orchard.)

We now have over 1,000 varieties so we will have specimen trees available to pick throughout the late-summer and fall.